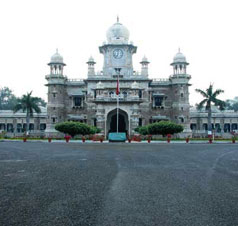 The new building was inaugurated on November 14, 1885 by the Viceroy, Lord Dufferin. By 1891 the Holkars of lndore and the Scindias of Gwalior donated the two student houses..

In 1905 Sir Henry's Son, Sir Hugh Daly, was appointed Agent at lndore, to the position previously occupied by his father. He Took great interest in the Daly College and flourished as a Chiefs College The Holkars then donated 118 acres east of the old campus and various Chiefs contributed to build on the newly acquired land. Construction started in 1906 on two student houses, a temple, a mosque and the Principal's residence. The main building was constructed out of marble from the Udaipur quarries and was designed in the Indo Sarascenic style by Col. Sir Swinton Jacob. The main building was officially inaugurated on November 8,1912 by the Viceroy, Lord Hardinge and the old campus was given up. For the, next 28 years the College was open exclusively to the sons of the Chiefs of Central India. In 1940, showing great vision, the Board of Governors decided to prepare students for a modern and free India. The Daly College came together with a few other institutions and started the Indian Public Schools Conference (IPSC) its doors were thrown open to admissions on merit, regardless of caste or creed. Since then the Daly College has grown in strength and reputation and now offers the most modern of education - in a heritage setting. In 2005 it became a member of the Round Square.

The Sanskrit motto "Gyanamev Shakti" or "Knowledge is power" requires no elaboration.

" To foster a democratic environment that encourages life long participation in the acquisition of knowledge and is supportive, innovative and demanding of excellence, combining the best of traditions with modernity. To develop well- rounded, independent thinking and confident individuals with leadership and communication skills who are socially, emotionally and spiritually secure. To create global citizens with strong values, who are environmentally and socially conscious and who have the ability to constantly drive and benefit from change."